Now that we’ve had a few days to recover, I wanted to take some time and recap the incredible 2016 Gay Pride Weekend!  First of all, thanks needs to go out to the Tucson Pride Planning Board for serving up a fantastic slate of fun and meaningful events for this years celebration.  Let’s set them up for next year by donating today! Be sure to head back here after you’re done 🙂  Fun Photos below.

Now that we have the business out of the way, we can get to the fun! Lets start at the top:

We have long held the Tucson Gay Pride Parade on the Friday before Tucson Pride, but that and a possible Block Party was the extent of the festivities for the night.  This year was completely flipped on its head!  Not only did we have the Tucson staple, Pride on Parade, but we were also treated to a host of events geared around the Gay Pride theme.  The night went like this:

Between the hours of 5 – 7, the Hut hosted Pete Kings infamous G3Pride Party!  With great drink specials, pulse-pounding music and delicious dinner options, it was a fantastic way to start Pride Friday Night!

The Hut was also the perfect spot to enjoy a cocktail and cheer on the Tucson Pride on Parade as it proceeded down 4th Avenue.  With more floats and participants than ever, this year’s parade was truly a celebration of our amazing spirit and diversity.  I didn’t get any photos, but send us your pics today and I’ll post them on this page!

After the Parade, everyone headed over to RBAR for the Rainbow Block Party.  If you’ve never been to RBAR, it’s a decadent little hole in the wall next to the Rialto Theatre with some of the best drinks in Tucson.  The Rainbow Block Party featured a killer DJ spinning some great dance tunes, perfect for setting the stage for what came next. 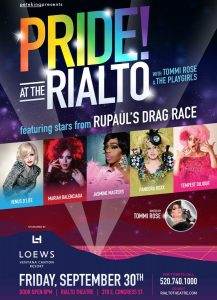 Pride at the Rialto

The entire night built up to this moment, and Pride at the Rialto surely didn’t disappoint. Meticulously planned and flawlessly executed, Pride at the Rialto had something for everyone.  We were entertained by the stars of Ru Paul’s Drag Race, as hilarious as they were gorgeous, who came all the way from Hollywood to share their own unique brand of Pride.  The drinks were delightful, the food was delicious, and the show was divine; a wonderful capstone for a wonderful night!

Pride in the Park

With the stage set, it was time for Tucson’s Gay Pride flagship, Pride in the Park, to step into the spotlight.  It was better than I had even expected!

I’d like to begin with a shout out to our amazing community!  We were fun and rowdy but always respectful and everyone, every single person that I’ve spoken with had an excellent time.  How many events can you say that about?

And did I mention the size of the crowd?  By the time I was there, they had already admitted over 4,000 Tucsonans and the line was growing by the second.  This was the most well-frequented Tucson Gay Pride I have been to in many years and I love Tucson for being so supportive and kind.

The event itself was a marvel of crowd and performer synergy as it seemed every act built upon the previous and the entire presentation wove a tapestry of precious moments that I will never forget.  Everyone, from the excellent DJ’s to the talented singers and presenters was in top form and the crowd repeatedly roared its approval.

Now, I might be a little biased, but the pinnacle of the event, atleast for me, had to be Tempest DuJour.  Tempest is a world renowned performer whom hails from Tucson, so the event had to be extra special.  We were given a small sample of his many talents and he left the audience starving for more.  Be sure to get your Tempest DuJour fix by checking out Retro Game Night!

If you didn’t have a chance to join us for Tucson Pride this year, you owe yourself to mark it on your calendar and come out next year.  This was the largest and most well-planned Tucson Pride event I have been to in a long time, and I used to plan them back in the day 😉 The Tucson Pride Board of Directors has set a high bar for themselves and I am excited to see what they have in store for us next year!  Thanks for reading!
Tony Ray

Photos from 2016 Pride in The Park