As the cold winter wind rustles the falling leaves in the Old Pueblo, we naturally escape the elements to the safety and security of home. If this were any other year, we would be planning large gatherings and sharing hugs and handshakes with friends and family. This year is a little different; thanks to COVID-19 and social distancing, we need to avoid large groups of people and stick with small Christmas events. Want to know a small event you can take part in right now? Fire up your trusty streaming device for GayTucson’s Five Fabulously Funny Adult Holiday Films!

Our list of Five Fabulously Funny Adult Holiday Films kicks off with one of my all-time favorites. Billie Bob Thornton turns in a tremendous performance as Willie, a raging alcoholic who robs large department stores along with his partner in crime, played by Tony Cox. The rest of the cast is also hilarious, with Cloris Leachman’s pitch-perfect portrayal of the grandmother character. I especially love this movie for it’s introspective look at families and whether it’s blood or choice that creates bonds.

While not officially a member of our vaunted list, Bad Santa 2 just missed the cut-off and is still one of my favorite Christmas movies of all time. In a rarity, this stands on it’s own and might even be better than the original. Bad Santa 2 features most of the original cast, probably the most important aspect of a good sequel, and tells a compelling story that helps complete the original narrative.

A newer entrant to the field, this Christmas Comedy can be streamed on Netflix while you read this. The star-studded cast revolves around a story arc dedicated to examining the holiday-induced stress the washes across young mothers as they have to plan and execute another Christmas. It’s also a charming look at Motherhood and their relationships with their mothers.

This is a really cute Rom-Com where a couple of single friends committ to being the date for the other during holiday traditions. These relationship dynamics are thrown out the window by the torrent of family dynamics. This is one of the most hilarious movies on this list and I greatly encourage you to hop onto Netflix and give this one a try!

Cute story, I actually took my whole team to this movie when it came out in theatres a few years ago. We had an office Christmas party at the movie Office Christmas Party! But I digress…

Office Christmas Party stars TJ Miller, one of my favorite actors and the reason behind my obsession with the Deadpool movie franchise and the How To Train Your Dragon series. If you are a fan, be sure to check out the newer Dragons: Race To The Edge on Netflix. I love his gravely voice and dead-pan delivery; he brings a wonderful adult comedy element to any project he is a part of.

Opposite TJ Miller stands Jennifer Aniston, the CEO and controlling partner in their enterprise. A more polished businessperson, Jennifer can’t stand her brother’s laissez faire approach to life and the family business. This dynamic erupts during a ridiculouly expensive office Christmas party that spins wildly out of control. I love this movie for it’s glimpse into the mind of the unchained party-goer. When people are allowed to truly release their inhibitions, what do they do? Watch to find out!

Last but not least, the Four Christmases, with Renee Witherspoon and Vince Vaugh, is a comedy treat for anyone with a quirky family. The couple’s parents are all separated, meaning they must visit 4 sets of family every year for festivities. Obviously, this becomes rather untenable and the young couple seeks a reprieve, so they tell a lie about working with children in another country. This tale quickly and hilariously unravels and you get to enjoy the fallout. Look out for wonderful cameo’s by Kristen Chenowith and Jon Voight!

Looking for more to do while you’re trapped inside. Check out the GayTucson Social Distancing Survival Guide! 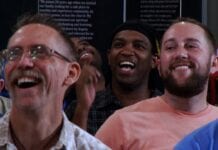 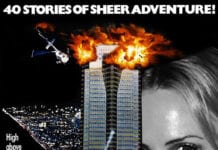 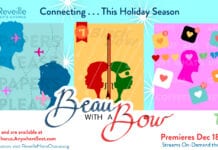 And Now Something Really Fluffy!